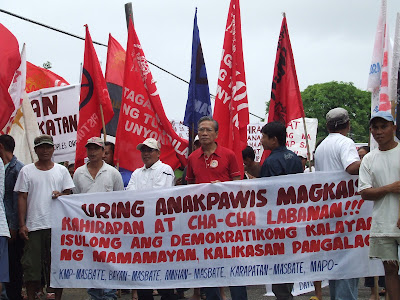 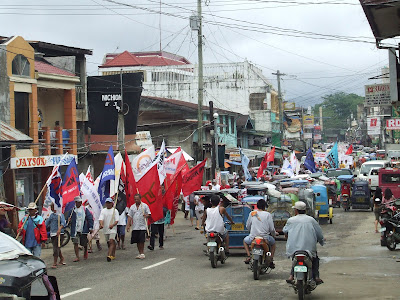 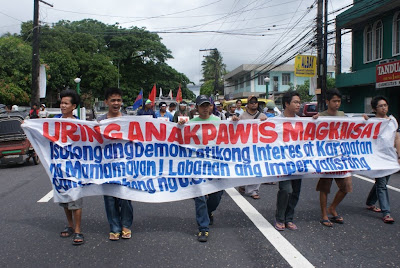 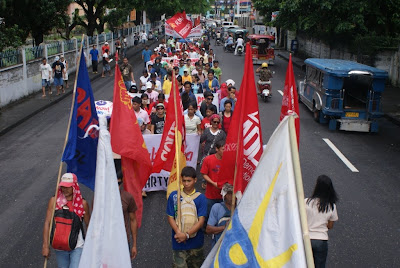 What is a typhoon when we have already braved far worse deluges of poverty and state violence?

Notwithstanding heavy Labor Day downpour, over 22,000 Bicolanos streamed along streets as well as indoor venues to resonate the people’s call for just wages, employment, and freedom from the economic plunder of imperialism and its local lapdogs. The widespread mobilizations were spearheaded by the nationalist alliance BAN BALIKATAN, Promotion of Church Peoples Response, in coordination with the provincial chapters of the Partylist groups Anakpawis, Gabriela, Bayan Muna, Kabataan, and Bayan-Bikol.

Bicolanos from various marginalized sectors today defied the rains which have for days loomed to douse the significant May 1 commemoration. On the contrary, despite periodic rains for the past days, members of militant people’s organizations have gone through regular tasks of educating fellow Bicolanos and consolidating advocacies. In fact, even at the onset of the week, streamers, posters and other educational materials have already been prepared, and others distributed. Resolve has been gathered to fight for P125 wage increase for workers, P3000 salary increase for government employees, and employment security for the Bicolanos.

Also, the militant organizations summed up the recent triumphant campaign against Balikatan and its deceptive “humanitarian” missions, while registering the people’s continued fight against armed imperialist intervention and state repression.

“The need to gather resistance against the onslaught weighed down on the people by the greedy capitalists and this collaborating Macapagal-Arroyo regime is far more weighty than the torrent of rains. The constant economic crisis and the subsequent repression and violence of the state have forged the people to become the determined lot that they are even on this stormy day.” Thus is the insight of Mr. Hernan Cereza, May One Committee’s Regional Spokesperson.

Though dampened, the resilient Bicolanos are instead overwhelmed with resoluteness to persist in the struggle for the people’s democratic rights and against imperialist plunder.

On a lighter note, May One rally organizers have deemed to append a vitalizing ingredient to today’s mobilizations. While leaflets containing the organizations’ standpoint on the day’s issues are distributed to the public, rallyists on the other hand are taken to be recipients of their doses of ascorbic acid to reinforce their already spirited forms. # 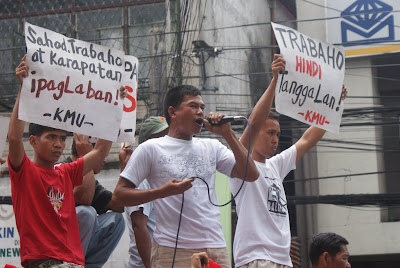 Posted by BAN BALIKATAN at 7:59 AM No comments: 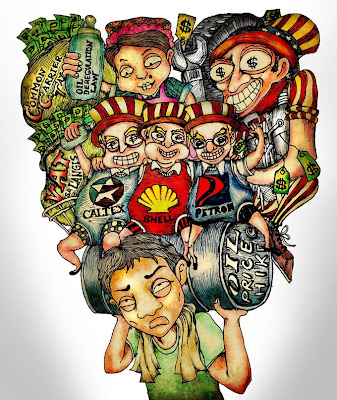 Abrogate VFA and Condemn the Acquittal of Daniel Smith

Abrogate VFA and Condemn the Acquittal of Daniel Smith

There is still hope amidst hopelessness.

With Court of Appeals reversing the Makati RTC ruling and acquitting Lance Corporal Daniel Smith last 23 April for lack of evidence manifesting the indication of force, threat and intimidation on Nicole, several groups expressed their adamant condemnation on the latter by conducting a protest action in front of the compound of the appellate court this morning and another at the US embassy this afternoon.

Such demonstration is a clear manifestation of the people’s grave disappointment and disapproval on the verdict of the justice system of the Philippine government on the issue and the upshots of the lopsided orders posed by the VFA. Likewise, the acquittal depicts that the Philippines-US ties will always supersede over national sovereignty and public interest. These flawed acts and defective methods are a big letdown to the national patrimony and integrity. They are strictly unforgivable and intolerable.

As long as the US-RP VFA is still on the run, legitimate justice and fairness is out of reach. Furthermore, the American troops will always have diversionary tactics to flee from their criminal liabilities.

There is an apparent and imminent need to reiterate and reaffirm the country’s principles regarding the resumption of the people’s sovereignty and dignity that we are fundamentally endowed with. To tolerate these continued unequal treatments and malicious schemes will further put the lives of the Filipino women at stake and incessantly undermine the value of justice and fairness. In due course, if these unrelenting semblances of injustice and disregard of women’s rights will not be dealt with accordingly, the country will take its toll and succumb in the hands of US.

We call upon the people to support this drive in firmly denouncing the VFA and Philippine Justice System. If we want to achieve justice and equality, we need to seriously act on these intricate matters. We do NOT need VFA and more importantly, we do NOT need intervention. We have the people and one another to sustain and alleviate the nation from this mess that we are in. Amidst adversities and these legal and constitutional battles, there is still hope for the if we will unite and grasp firmly the lessons of the past by upholding the national sovereignty and the national interest together, resolutely and steadfastly.

troops, VFA drive them out now!

Posted by BAN BALIKATAN at 7:40 AM No comments: 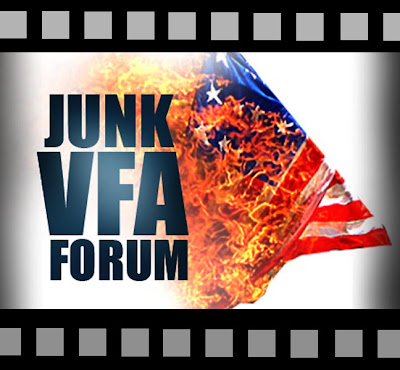 SUMABA KA (Sorsogon United Movement for Peace Against Balikatan) would like to invite you to a Junk VFA Forum on the 25th of April at the Matthew’s Hall of the Fatima Church, . The forum will start at nine o’clock in the morning (9:00 a.m.).

The forum will be attended by lawyers, law students, professionals, teachers, government employees, local government officials, people from the church, academe, and other sectors of society.

The forum aims to provide necessary information to the public, so that they will be acquainted with the burning issues of the day. We are in the midst of a raging debate over the presence of US troops in the province under the US-RP Balikatan war exercises and the Visiting Forces Agreement (VFA).

Posted by BAN BALIKATAN at 8:49 AM No comments:

US Troops Out Now!

Posted by BAN BALIKATAN at 12:59 AM No comments:

BAN BALIKATAN
Legazpi City, Bicol, Philippines
Alliance of nationalist and patriotic Bicolanos against the 2009 RP-US Balikatan Exercises - the 25th Joint RP-US War Exercises, to be conducted in the provinces of Region V Bicol, Philippines. BAN Balikatan believes that the main purpose for conducting joint military exercises by the AFP and US Military in Bicol this 2009 is to intensify the US intervention in our country.This activity is a flagrant violation of our country’s sovereignty and integrity based from the related provisions in the Constitution.